Reflection on the Gospel Reading 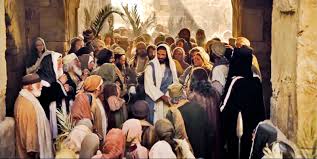 The first procession is the one of biblical tradition: the one that was part of the Sunday School pagantry of my tradition. Jesus enters the Holy City from the east. He has come from Jericho, somewhere ‘in the wop wops’ (an outlying rural place – a long way from the action of the city!). The writers bring to our attention that at the same time there is another procession entering the city. This second one is bigger and louder. At the same time Pontius Pilate, the Roman Governor, was approaching the city from the west. 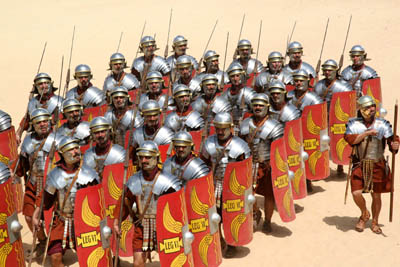 Pilate has travelled from Caesarea Maritima (Palestinae), the Imperial Capital of the territory of Judea on the Mediterranean coast and is accompanied by a large military force. The Roman authorities were prepared for trouble. The small city of Jerusalem, with a regular population of some 40,000 people, experienced an influx of some 200,000 people for the Jewish Passover observance. Imagine that! Imagine the opportunity for insurrection: a demonstration of resistance to the occupation.

We in New Zealand have only to think back 12 months to have an inkling of the tension that existed. We were curtailing ANZAC observances for fear of ‘insurrection’, to ensure ‘public safety’, we had armed police stationed outside Jewish gathering places and even visiting our churches. This was as a response to an unknown in New Zealand: a massacre in a Mosque in Christchurch. The atmosphere in Jerusalem back then would have been many more times acute.

The Governor’s procession demonstrated Roman Imperial might. It was a military procession. Visualise cavalry on horses, foot soldiers, leather armour, helmets, weapons, banners, golden eagles mounted on poles, sun glinting on metal and gold. This procession displayed not only Imperial Power, but also Roman Imperial Theology. According to this world view, the Emperor was not simply the ruler of Rome and the Empire, he was the Son of God!

How this contrasted with the other procession: poor people, generating genuine happiness and full of the ‘joys of life’, calling out to Jesus: a peasant, riding on a donkey, such a lowly animal. There are no imperial trappings for this man. The centre of the procession is someone appreciated by his followers: one who spoke sense, one who spoke into the lives of people facing the realities of life, proclaiming a reason for living.

Such a contrast: a contrast likely to come to the attention of the authorities. Surrounding Jesus was a crowd chanting ‘Hosanna’. This literally means ‘save us’ … and what more could be understood from these enthusiastic chants … the unspoken ‘save us from the Romans’. This was a volatile situation.

Tucked away in the events between this day and Good Friday we read of the actions of Judas Iscariot (Matthew 26: 14 – 16 and 46 – 49). We read that Judas approaches Jesus in the garden on the Mount of Olives, accompanied by the Zealots intent on taking Jesus into custody. The Bible, and our tradition, gives Judas very bad press, because of how the record states what happened in the garden (and there’s almost the feeling that Judas gets what he deserved when he takes his own life a little later in the story.

Some years ago, I was startled to read an opinion that Judas was not the ‘betrayer’ as commonly described and that some held the view that he had a different motive: a noble one. This view was that Judas’ by going to the authorities, and ‘dobbing Jesus in’, was attempting to push Jesus into being the one to lead the highly anticipated revolt to overthrow the hated Roman oppressor. In this mould Judas was a dedicated revolutionary. Judas saw Jesus as a reluctant political messiah: and hoped that by handing Jesus over to the authorities he would trigger the long-awaited uprising.

The Palm Sunday story is set in Palestine. It is a story set in its time. It’s also a story that reflects much of what we know about ‘the human condition’. It is an ancient yet very modern story. Often, we see groups, teams and individuals who are held up as examples and attract a huge following, only to see the whole atmosphere change quickly and support evaporate. If there are rugby fans amongst my readers, consider the fortunes of the Blues Franchise. The faithful support base eroded in recent years. This base was regenerating and, but for the ‘COVID-19 interruption’ may have been restored. When fortunes vary some keep the faith, others drift away. The story we have today has all these elements.

In today’s story, what’s different? What is different is that the focus that day was ‘The man from Galilee’. This coming week we follow more of the story. It walks us through the days to the Friday crucifixion. We will see Jesus portrayed in a new light from Easter Day.

We know that it is the resurrection story and the disciple’s realisation that they had a new and positive message to share that brought a change then: the message that this Jesus story brought a new hope to the world. This Jesus spoke to the poor, disposed and disempowered of his world, memories of which came to life in the Disciple’s memory as signs of hope for their world.

Thanks be to God. May it be so. Amen